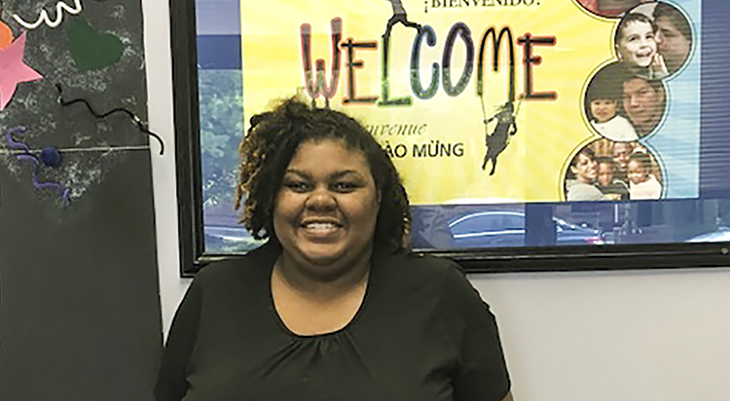 Rasheeda has been receiving services from The Arc Baltimore since 2012 after completing her education at Maryland School for the Blind. At that point, she had already received her 90 hour Child Care Certificate from the Single Step program at Community College of Baltimore County – Dundalk Campus. For the past several years she has attended our center in Dundalk, where she volunteered in the food pantry and assisted other individuals with various activities.

In October 2016, a job coach referred her to the Business Services Department to assist with finding and maintaining employment. When we first met with Rasheeda, two things stood out: her love for working with children and her desire to seek employment in the community. She was adamant that she only wanted to work with children. However, from time to time, should would entertain other opportunities although they were not her passion. Over several months we applied to and visited several area daycare centers. Despite having her 90-hour child care certificate and being CPR certified for infants and toddlers, many employers were hesitant to offer her a position due to her lack of relevant experience and her having low vision.

In February 2018 she was given an opportunity to intern at St. Paul’s Plus Child Care center. The director of the center agreed to allow Rasheeda to intern there 2 days per week. During her internship, she was allowed to work with various age groups to see which would be the most comfortable and best allow her to utilize her skills while acquiring new ones. She quickly gravitated to the 3-4-year-old age group. During her 3 hours there she would assist with meals and helped the kids prepare for naps as well as carpet and recess time. Eventually, she began working one on one with a little boy with autism and they would complete various activities together. Rasheeda eventually became a little discouraged with going to the center because it was not a paid position, and she was eager to make a regular paycheck. However, she continued because she recognized the value of the experience. Initially, St. Paul’s wanted to hire her for the summer, but because of low enrollment, they were unable to do so. While continuing to volunteer at the day care center, an opportunity arose at The Arc assisting with childcare during the parents’ groups and educational series.

In July 2018, Rasheeda and her job developer met with the recruiting team at Kennedy Krieger to discuss various opportunities at their child care centers. After the meeting, the recruiters decided they would refer her to the PACT Center in Woodlawn for a tour and interview with the center director and program manager. After speaking with the recruiter several days later, she informed me that they were very impressed with her experience and even more elated over the letters of recommendation she received. On August 9th Rasheeda was informed that she got the job. She was extremely excited when she heard a week later that she received the job!. Now to months in, she excels as a child care aid. Patience and years of experience finally paid off for Rasheeda.