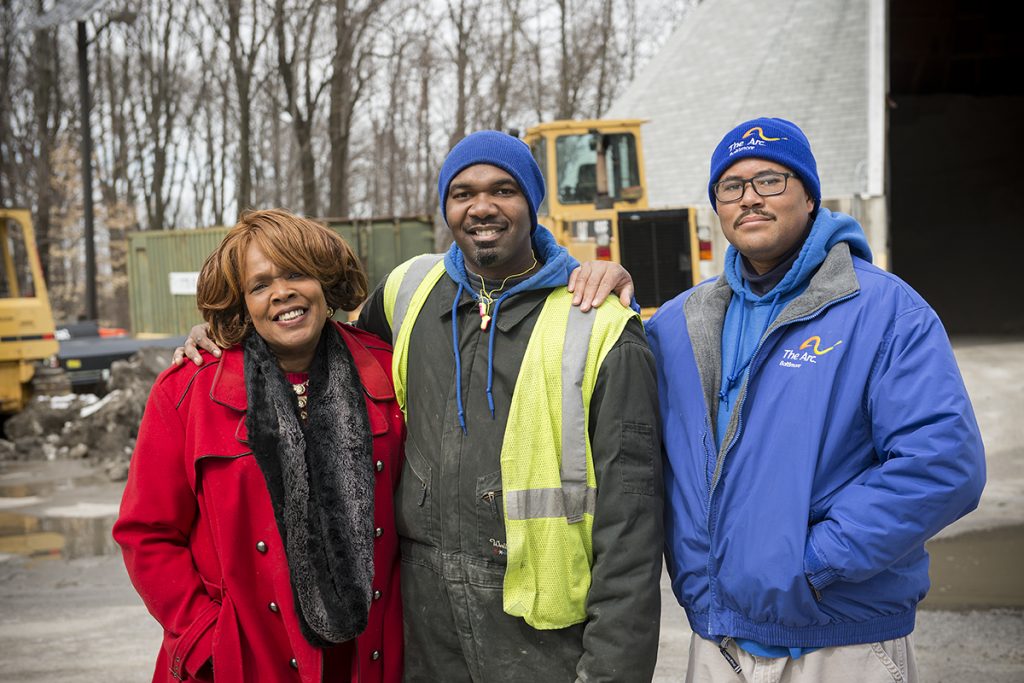 To call Veronica Martinez an involved mother is an understatement. She leaves her house in Abingdon every morning at 6 to take her son, Will Douglas, to his supported employment landscape job at the Social Security Administration in Woodlawn, because Mobility service isn’t available where he lives. When he gets off work at 3 p.m., she’s there to pick him up.

“Veronica isn’t just Will’s mom,” says Wes Bickham, the landscape site manager, “she’s the crew’s mom. She makes brownies for our parties. It makes Will feel amazing that everyone loves his mom, and it gives him a better work life.”

Veronica was told Will had an intellectual disability when he was three years old. From that moment on, she made sure he was in “a real school.” Will graduated from Milford Mill High School and the Community College of Baltimore County.

Will, now 32, has been with The Arc since 2002, when he turned 21 and graduated from school. “I like driving the Z-Master riding mower,” Will says, “and I can use weed-eaters, edgers, and blowers.”

His supervisor, Raimore Wilson, describes Will as a pleasant, low-key guy who knows a lot about movies and music. “Just this morning the crew and I were laughing with Will because he was quoting lines from an old Jackie Gleason movie,” Raimore says.

Veronica appreciates that. “His supervisors are like big brothers to Will. They teach him about life, about dating, and about maturing. They’ll tell him, ‘Will, you’re a grown man. You should do things like make your own lunch and make sure your uniform is clean.’”

Suzanne Davenport, Will’s case manager, is another valued member of his team. Suzanne helped find a driver’s education course for Will and was instrumental—no pun intended—in getting Will hired as a DJ for Arc parties.

“My mother is a singer,” Will says, “and she has the equipment I need to DJ. I really like doing Christmas parties, birthday parties, and retirement parties.”

Veronica adds that Will wanted to be a DJ for a long time. “The Arc made it happen.

“When Will first came to Seton [Business Park], I never thought he’d have a real job, but he has a very good one. He makes a good salary, too—money most people wouldn’t think he’d be making because of his disabilities.

“Now he can take care of the lawn at home. He mows, edges, and aerates for us.”

From time to time, people suggest that Will and Veronica’s long commute could be avoided if he found a job closer to home, through a different service provider. For Veronica, that isn’t an option. “The Arc Baltimore is family to us.”