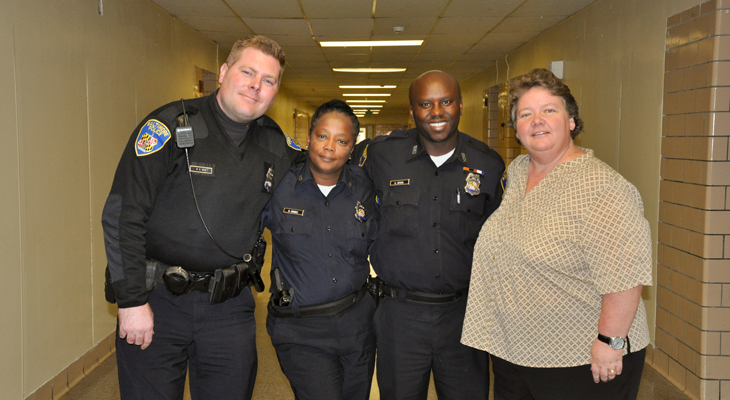 Originally published as an article in our Holiday 2015 Advocate Newsletter

The state of Maryland took a big step forward towards amplifying the voice of people with intellectual and developmental disabilities when Governor Larry Hogan signed a bill mandating that self-advocates become involved in the training of police officers. Maryland is the only state in the country that has such a law, which took effect July 1.

The resulting program will be known as the Ethan Saylor Alliance for Self-Advocates as Educators. In January 2013, Ethan died in police custody after being removed from a movie theater by three off-duty Frederick County Sheriff deputies because he didn’t have a $12 ticket. The medical examiner ruled his death a homicide by asphyxiation; a grand jury found no wrongdoing on the part of the deputies.

Ethan’s mother, Patti Saylor, channeled her grief and anger into fighting for justice and police training. Her efforts have resulted in the appointment of the first Commission for the Effective Inclusion of Individuals with Intellectual and Developmental Disabilities.

Law enforcement training for all new recruits in Maryland has already started. Saylor hopes self-advocates will be involved in that training. “They have a voice and we need to listen to them. It’s their life,” she said.

City Police Learn from The Arc’s Training, Too

Recognizing the importance of training police, the Behavioral Health System in Baltimore called The Arc Baltimore when it wanted to add a developmental disability component to its Behavioral Emergency Services Team (BEST). Dawn Davis-Brodeur, director of training for The Arc Baltimore, has been helping BEST train Baltimore City police ever since, suggesting methods for officers to interact safely and in a mutually beneficial manner with individuals who have intellectual and developmental disabilities.

Since then, Dawn has participated in four trainings for police academy recruits, each with 35-40 participants. Additionally, she worked with a police coordinator to develop an in-service training for veteran police officers.

The information Davis-Brodeur offers police is vitally important for them to have, she says, because people with I/DD are seven times more likely to come in contact with law enforcement than the rest of the population. They may be an alleged perpetrator of a crime, a witness to a crime or a victim of a crime.

At trainings for recruits, Davis-Brodeur discusses basic characteristics of individuals with I/DD and facilitates role playing. One recruit interacts with another, who simulates a communication issue. Afterwards, the group debriefs the interaction to see what the police did right and how they could improve next time.

Asked what strategies she provides to help trainees, Davis-Brodeur says she recommends that they recognize that disabilities may not always be readily apparent. She advocates that police officers go slowly because the person may need time to process what officers are saying before they can formulate a response.

She adds, “Presume intelligence. Do not assume that because a person communicates in a ‘non-traditional’ way that they lack the ability to answer questions or be a credible provider of information.”

Another tip she gives police: Always speak directly with the person first. Only after doing that should officers turn to others for information.

Davis-Brodeur says that in almost every class she has taught, whether for police cadets or veteran officers, there is usually at least one person who has had some experience with a person with an I/DD. “Being able to draw on their experiences has been an invaluable tool.”