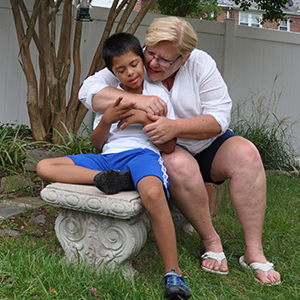 With great joy, we announce that Ever has a Forever Family! On July 16, he was adopted by Pam Corkren and her mother, Carolyn Post, his foster family for the last five years. 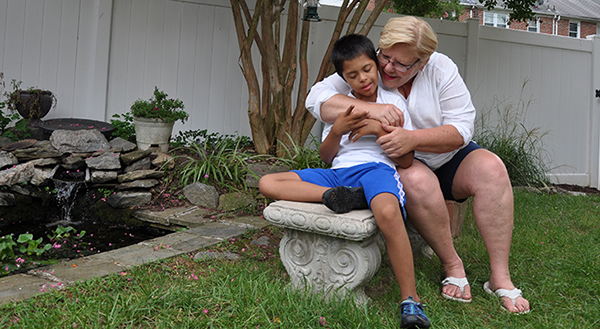 Ever came into foster care with The Arc Baltimore in October 2015 after tragically losing his mother in a hit-and-run accident. When placed with Pam, it was known that Ever was diagnosed with Down syndrome. However, after much advocacy from Pam, it was determined that Ever was also diagnosed with autism. Pam spoke of several challenges raising a child diagnosed with both autism and Down syndrome, and the family tackles one hurdle at a time.  Pam speaks of the most significant hurdle often evident with persons diagnosed with autism was stimming. Stimming is defined as self-stimulatory behaviors such as rocking, pacing, and aligning or spinning objects, or hand flapping; people around him may be confused, offended, or even frightened. Stimming behaviors are often characterized by rigid, repetitive movements and/or vocal sounds which can include Ever sitting on a bed with his legs straight and bouncing 3 ft (yes, 3ft!) high off the bed, banging his chin on the bed, and making loud sounds. The auditory stimulation has been difficult for another of Pam’s adopted sons. Pam supported Ever’s understanding that everyone is to be considerate of all family member’s needs.  With persistence and consistency Ever has progressed.

Ever enjoys being outside and just hanging out in the sun. One of his favorite past times is laying on his belly and swinging, which he can do for hours if allowed. Ever came from a Spanish (only) speaking home so Pam is extremely proud of Ever’s progress in learning English. Pam has taught Ever to use both hands which was new for him as prior to placement he did not use his hands for ADLs. Ever can also feed himself, get his favorite chocolate milk from the fridge, and engage in self-care. Because Ever does not enjoy using his hands to write or draw, he receives OT services to enhance these skills. 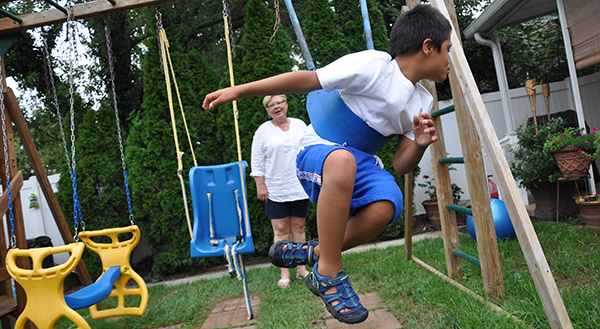 Ever is a friendly and adorable young man. He enjoys hugs, kisses, and play fighting. He also enjoys engaging in play with his peers (even though he sometimes presents as standoff-ish until he gets an understanding of the activity).

Pam Corkran has been licensed as a foster parent with The Arc Baltimore for 28 years and to date, she has adopted four of her foster children and opened her home to a youth who is now an adult.

Pam believes relationships are intended to last a lifetime and states, “Even with all the challenges and progress, love shared is the most heartwarming feeling of all. We love you, Ever!”

We are so happy that Ever has found his forever family.