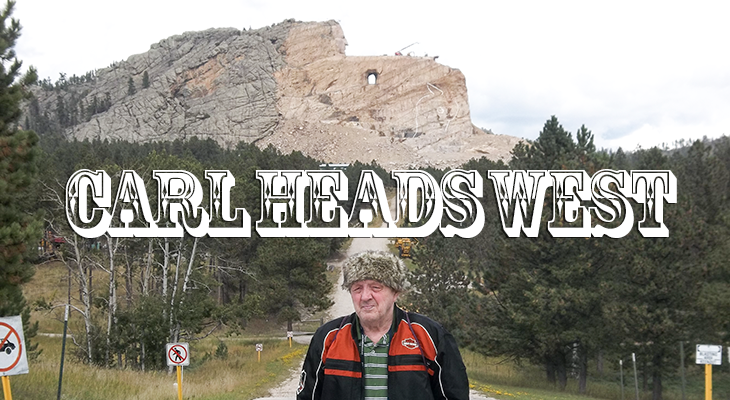 This past fall, Carl, a supported individual, and Melissa Myers, his direct support staff, embarked on a cross country train ride together. Carl has wanted to go on a trip like this for many years. When Melissa heard him talking about it, she wanted to help make it happen.

They worked together for about a year to organize a plan through a travel agency that specializes in train trips. Their itinerary was planned by the agency and took them across a handful of western U.S. states, including Utah, Idaho, Montana, South Dakota, and Nebraska. Some of the highlights of their trip included seeing Mount Rushmore and the Crazy Horse Memorial, visiting both Yellowstone and Badlands National Parks, and attending a Chuckwagon Supper and Dinner Show.

Carl and Melissa spent two and a half weeks on this trip and enjoyed every second of it. They spent their time traveling with the same group of people and Carl made many friends, some of which he and Melissa are still in contact with today. The trip was long and exhausting, but it was completely worth it and is an experience that Carl and Melissa will never forget.

Carl and Melissa brought in their pictures for us and shared some highlights and funny stories from their adventure. Many are featured below. Enjoy!

“We went on a boat ride in Chicago. They asked me what boat I wanted to go on. I said the big one! It went so fast and we got splashed with water. The boat driver asked if I wanted to go again so we went twice.” 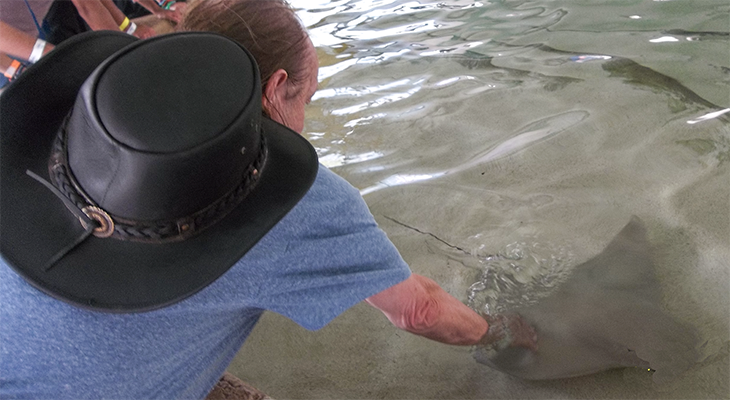 “The aquarium in Chicago, Shedd Aquarium, was really cool. I got to touch a stingray, but I had to stay away from its jaw so it wouldn’t bite my finger off. It felt nice and soft.”

Carl was very excited to get on the train to start their trip. They found their bunks and Melissa said, “You’re on the top bunk and I’m on the bottom.” Carl looked at her and said, “Well, how am I gonna get down from there?!” Carl ended up sleeping on the top bunk, and they made it work just fine.

They snapped this photo during their stop at Bear Lake, which is located on the Utah and Idaho border. “Don’t I look good in that picture?” Carl said.  The water there was deep and cold.” 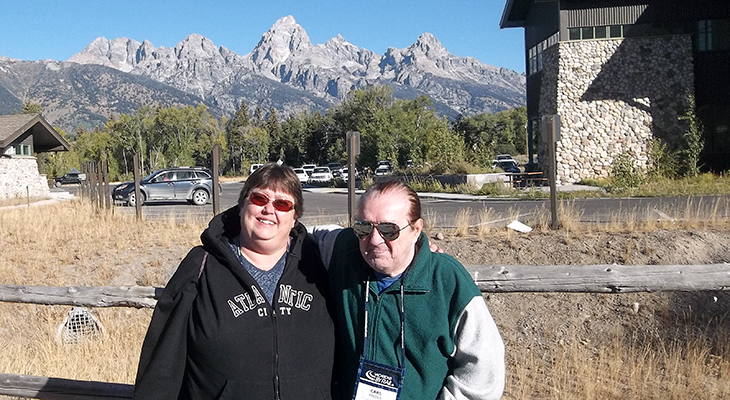 This was at a stop in Grand Teton National Park. “The mountains look so pretty,” Carl said. 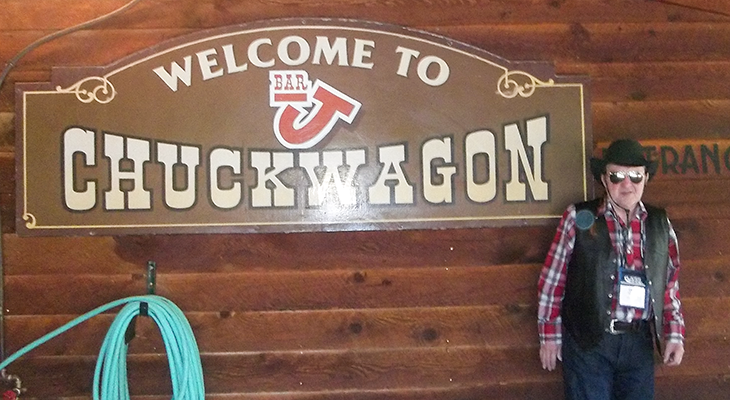 The tour attended a Chuckwagon Supper and Dinner Show in Jackson Hole, Wyoming. “The dinner was good,” Carl shared, “They will put whatever you want on your plate, so I said no beans for me!” 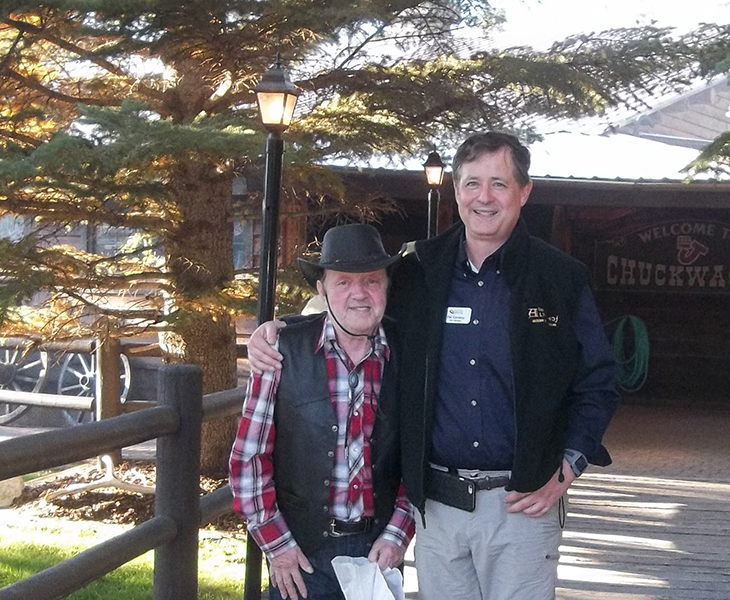 “That is Patrick, he is a friend of mine. He was the tour director.” 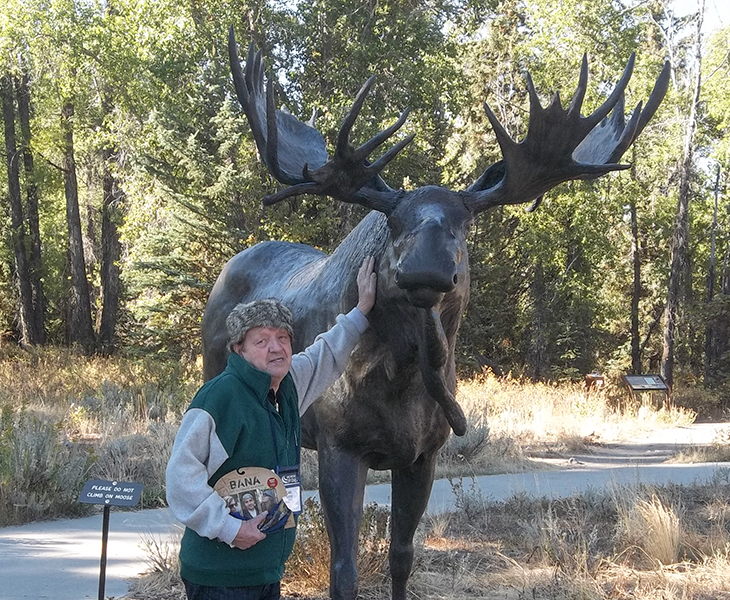 Carl was so excited about getting a raccoon tail hat. “He got so many compliments on that hat,” Melissa shared. 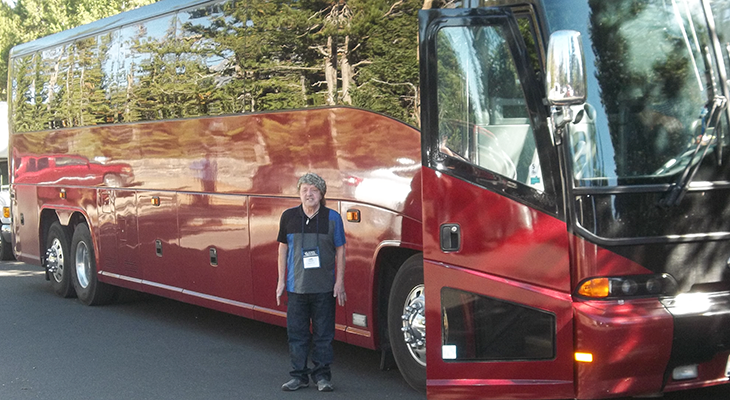 “And there’s my bus in Utah! That big red bus was comfortable and fun.”

They passed many buffalo as they passed through Wyoming. Carl was not as excited to see them as everyone else was. “I don’t like buffalo. I said, ‘hey everybody look at that buffalo! I’m not getting near that. It stinks.’” 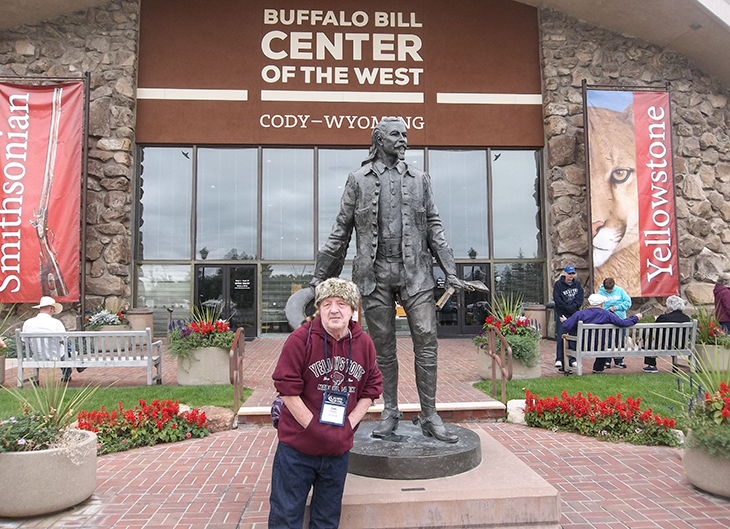 Carl said that visiting the Buffalo Bill Center of the West in Cody, Wyoming was one of his favorite parts of the trip. When asked why he liked it so much, he said, “There were a lot of people there from different places. They would tell me which state they lived in.” 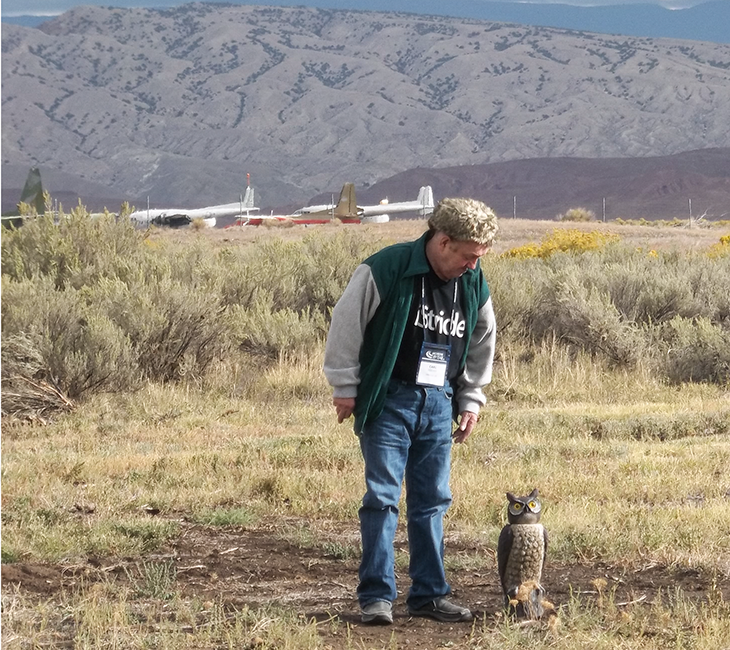 While visiting an airplane park in Wyoming, Carl was intrigued by an owl out in the field. He told Melissa that he was going to see it, but he didn’t realize that it was a decoy. Many people had gathered around to watch him because they all wanted to see his reaction. He made it to the owl, leaned down to look at it, and yelled back to Melissa, “This owl ain’t real!” Everyone around laughed. It is one of their favorite memories from the trip. 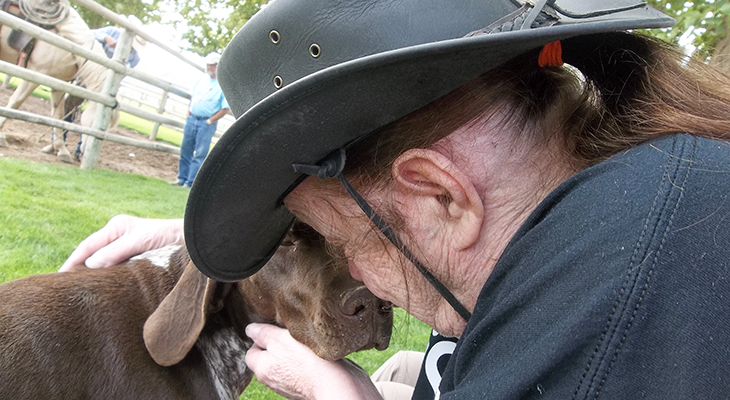 Carl got up close and personal with a dog while on a ranch in Montana. “I remember that dog! That dog gave me a kiss. I hope it was a dog.” 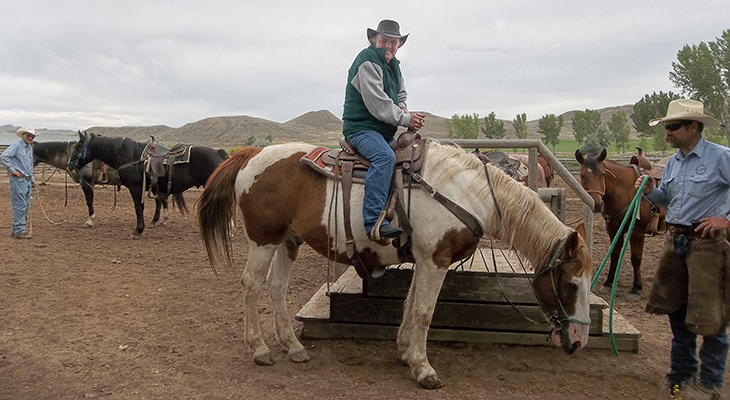 Carl was equally excited as he was concerned about the opportunity to ride a horse in Montana. The cowboy who owns the ranch wanted Carl to have a great experience, so he led the horse around for Carl. This way he was able to have the same experience as everyone else. “I really liked Poco the horse,” Carl said. “He was a pretty horse and was very nice to me.” 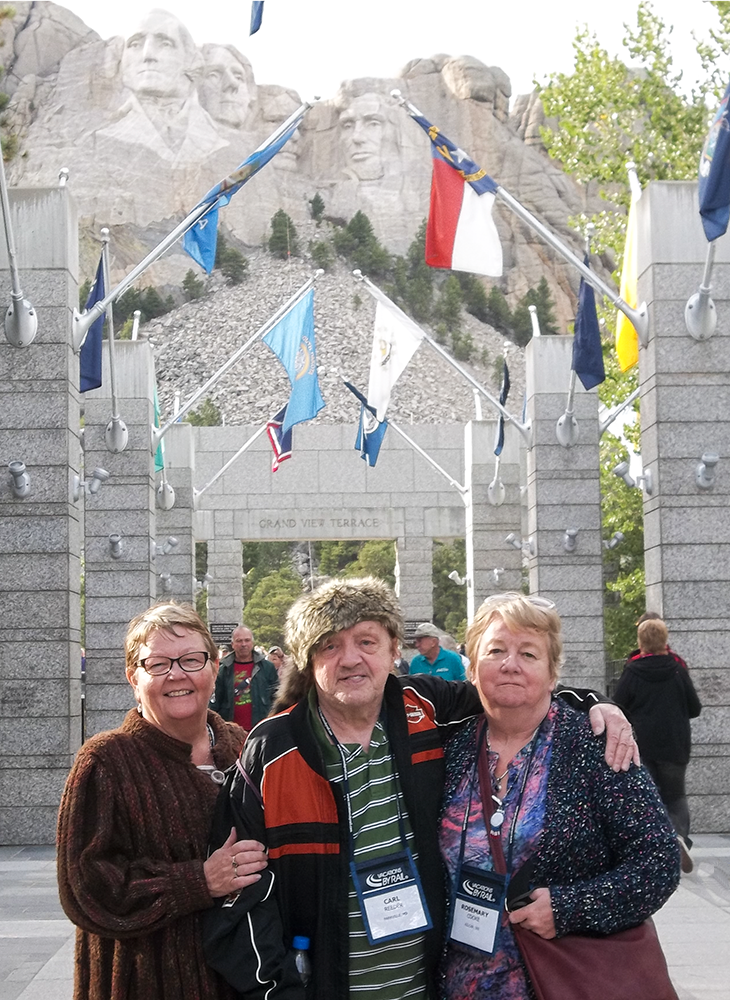 “Those are my two lady friends. They are from Ireland. We saw Mount Rushmore together.”

Carl already wants to make plans for his next trip. He wants to go to Hawaii to “meet pretty hula hula girls.” We hope that he will be able to make this trip happen soon!