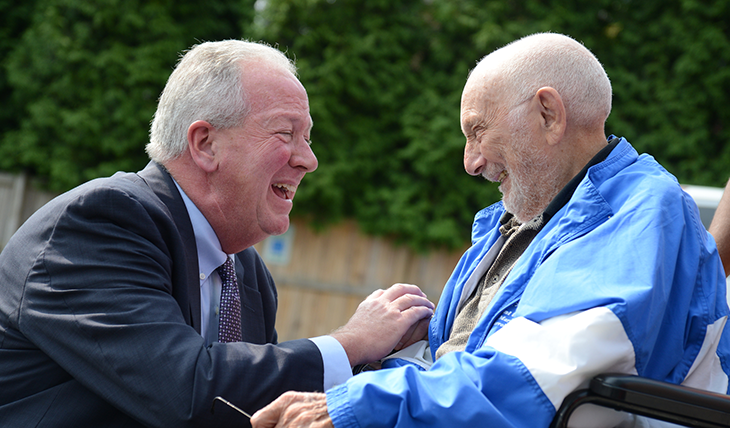 Under Morgan’s leadership, The Arc Baltimore has become one of the nation’s largest and most respected organizations of its kind. The Arc currently supports more than 6,000 Baltimore City and Baltimore County residents with intellectual and developmental disabilities and their families.

“The Board is very confident that a new leader will be identified to sustain and advance The Arc Baltimore’s mission to provide advocacy and high quality, life-changing supports to individuals with intellectual and developmental disabilities and their families,” says Board President Neil MacDonald.

Filling Morgan’s shoes, however, won’t be easy. As MacDonald notes, “Steve Morgan’s impact on Baltimore and on people with developmental disabilities and their families is nearly impossible to quantify. He has led The Arc Baltimore with integrity and accountability always at the forefront. More importantly, he has led with the mission in his heart and with respect for each person we support.”

During Morgan’s tenure as Executive Director, the supports provided by The Arc Baltimore have gone through a continuous process of transformation, with individuals experiencing greater choice, independence, productivity, and community inclusion.

Morgan was responsible for closing The Arc’s traditional sheltered workshop and a half-dozen day activity centers as individuals formerly served by those programs entered competitive or supported employment.

In addition, nearly 300 people – many of whom previously lived in State institutions – now live in homes with three or fewer individuals and the staff complement needed to enable each person to learn new skills and be fully engaged in their community.

Morgan also spearheaded an increasingly wide range of supports The Arc Baltimore now provides to families of young children. In addition, the organization has become a licensed foster care provider.

When asked what kept him at The Arc Baltimore for his entire adult career, Morgan replies, “The people – first and foremost, those individuals we support who simply seek the chance to enjoy the same kinds of daily pursuits we all do; the parents and other family members of those we support who are their best advocates; my professional colleagues, both the staff within The Arc Baltimore as well as those from other chapters of The Arc and other nonprofit organizations; and, of course, our volunteers, our partners in government, our donors, foundation partners, sponsors, employers, and especially the volunteer members of our Board of Directors who have been so giving of their time, talent, and treasure.”