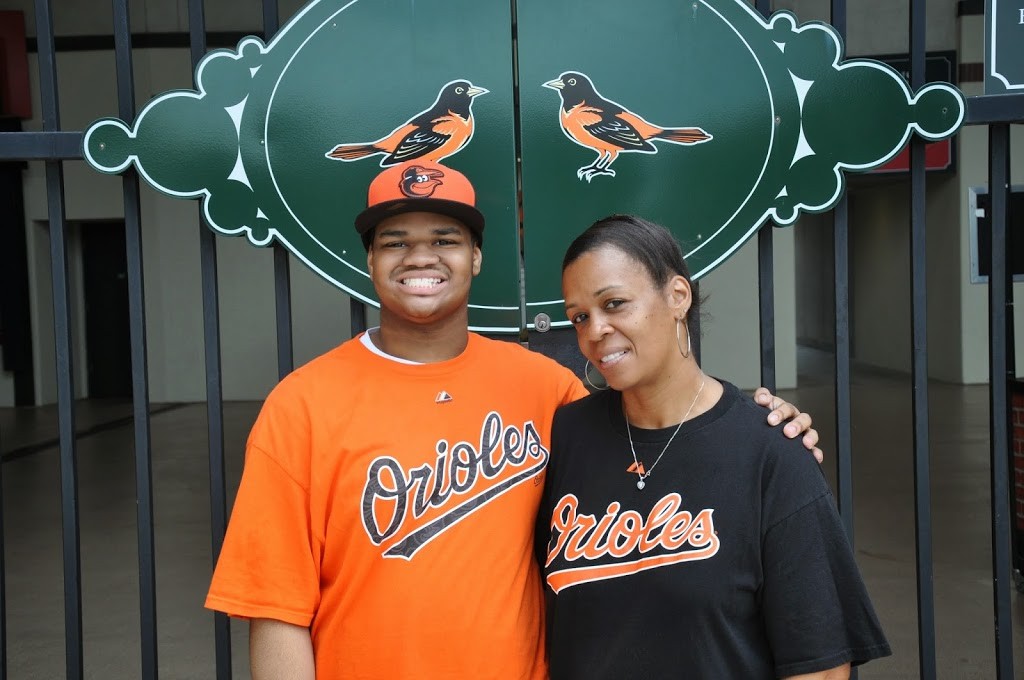 This year, the Professional Baseball Athletic Trainers Society (PBATS) partnered with The Arc of the United States in order to promote the inclusion of children with intellectual and developmental disabilities in their PLAY (Promoting a Lifetime of Activity for Youth) program.  The program started in 2004 and exists at all thirty ballparks across the United States. Children from The Arc Baltimore and The Arc Central Chesapeake Region attended the Baltimore event at Oriole Park at Camden Yards last month.  Participants learned proper hitting and running techniques on the field, listened to presentations on steroid use, healthy lifestyles and nutrition, and met Orioles outfielder David Lough during a Q&A session. Three families shared their experience below.
Karen Best and her son Daniel
*Written by Karen Best Daniel’s participation in the PLAY program at Camden Yards was a dream come true for my son Daniel. He enjoyed every minute of it, especially the opportunity to go out on the field and do hitting drills. I was thrilled to see Daniel having so much fun and interacting with the other children.  The health discussions were great and were very important for the kids to hear. After the Orioles player David Lough finished his talk about the importance of nutrition, he was kind enough to stop and take a picture with Daniel.
We moved to Baltimore from New York in 2000, and Daniel converted me from a lifetime Yankees fan to an equally die-hard Orioles fan as he got older. We don’t even pay attention to the Yankees anymore! So, when we found out that we were also getting tickets for the game that evening, we were overjoyed. Despite the rain delay and an Os loss, we had a great time. Thank you to everyone especially The Arc Baltimore and the PBATS for this unique opportunity.
_____________________________________
Becky Matthews and her daughter Raven
*Written by Becky Matthews Raven had a wonderful time at the PLAY program event at Oriole Park at Camden Yards!  She went with her stepfather, Ron, and her Uncle Scott. They both had a great time as well.

Raven’s favorite time of the day was when she got to hit the tee ball and run the bases. No one expected her to do it from the wheelchair. Raven likes to do everything. All she needs is a little help. After she hit the ball and Ron pushed her around the bases, everyone started cheering. She loved it! She knew they were cheering for her.

Raven loved hanging out with all of the other children. Listening to the presentations on health and wellness in the Orioles dugout was another favorite. Raven loved seeing everyone and the excitement of the event. Both Ron and Scott were very impressed at how well they were all treated and the accommodations made for all of the children. They were treated with kindness and respect, and were told to just let someone know if they needed anything. The first part was Major League Baseball and all of its teams and players to help fight steroid abuse and to educate the young people of America about the dangers of steroids and promote a healthy and active life style.
The first part of the day at Camden Yards was to exercise. I even got to swing the bat at a baseball which I finally did hit – after a couple of swings.  Then, we went to the dugout where the team nutritionist spoke about eating healthy foods like fruits and vegetables (broccoli, cherries, bananas, corn, etc.)  We then went to the hygienist who spoke about personal hygiene, brushing your teeth at least twice per day, showering daily and using deodorant.
We were going to our last station where we would have done running drills and exercises, but all of a sudden, it started raining like cats and dogs.  Then, we went inside the locker room where Orioles player David Lough spoke to us about how, during his childhood, he ate healthy and exercised thanks to his mom.  We also got to ask him questions which I enjoyed.  We also got a goodie bag from the Henry Schein Cares Foundation. We then got news that we will get two tickets to the game scheduled for that night.  Even though the game was delayed due to rain, I still had fun.  From morning to night, it was a very long day coming to an end.
A great big thanks to the Taylor Hooton Foundation, Henry Schein Cares Foundation and The Arc Baltimore staff.
_____________________________________
To view more pictures from the event, check out the PBATS photo album.