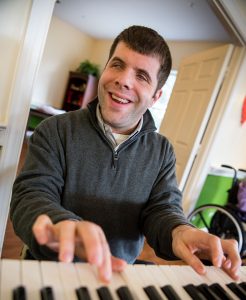 For Benyamin Waldman, playing music always came very naturally, as did performing for others.

Several times a month, Benyamin plays his keyboard for seniors at two local assisted living communities. He eases in with a few Broadway show tunes and Disney classics to get the audience singing and clapping along. Then, he crescendos with “America the Beautiful” and finally closes with “Que Sera, Sera”, a crowd favorite.

Since coming to The Arc right after his graduation from Maryland School for the Blind, he’s developed a loyal following that can’t wait to hear him play.

Around the age of five, a family friend purchased a used keyboard at a yard sale for Benyamin. Despite his visual impairment, Benyamin took to it immediately and fell in love with playing. He began regular piano instruction from a teacher who set high demands. With perfect pitch and an ability to recreate any song on the piano after hearing it only a few times, it was evident that he had a gift. He studied at the Peabody Institute and has performed for large audiences at local synagogues and fundraisers.

When asked about his music, Ben’s face immediately lights up. He says, “music makes me happy. It makes me want to dance”, and “my favorite part of the concerts is when I have everyone’s attention.”

Benyamin’s concerts are one aspect of his participation in The Arc’s Community Learning Services program that creates a customized weekly schedule of community activities that appeal to each individual’s interests. During the week, he plays basketball, swims, takes Dance Movement and Story Theater classes, practices Tai Chi, and delivers food for Meals on Wheels.

According to staff, “Ben thrives in this program because it complements his outgoing nature and willingness to try new things.” His positive energy “brings joy and life to everyone around him.”  He doesn’t like to miss days either. Once, Ben’s mother called staff for help with convincing Ben to stay home because he was sick.

Benyamin embraces every opportunity in life, and finds meaning in sharing his passion with every willing audience.